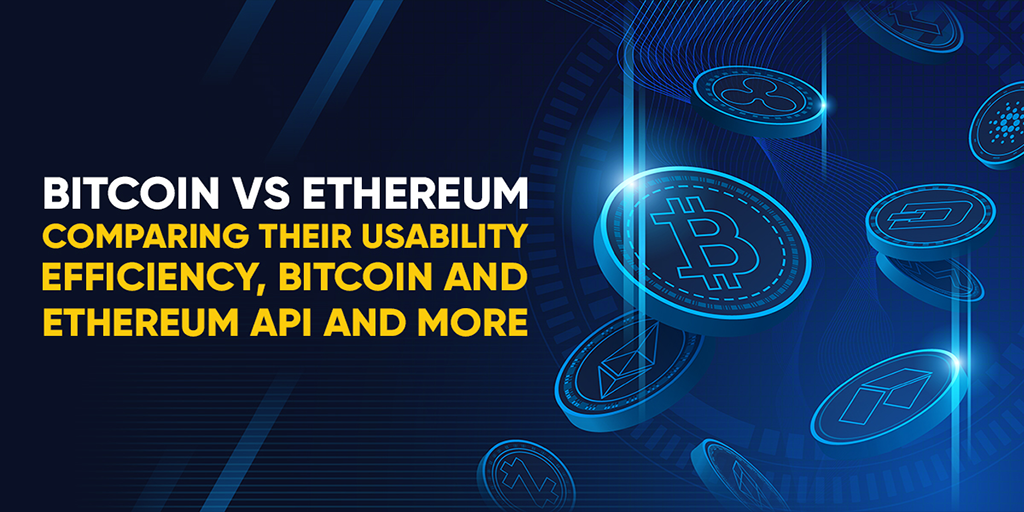 There are over 2,000 cryptocurrencies on the market today and a new token is live each day. People have become extremely fond of these digital assets as they proved to be quite superior to the regular payment methods. Not only are the transactions more efficient and more secure, but people void all types of fees and even have the chance to make a profit.

We are sure that you know that cryptocurrencies are mostly used for making money today and the two most popular and most profitable assets are Bitcoin and Ethereum. Yes, Bitcoin’s price is way bigger than Ethereum’s, but that doesn’t mean Ethereum is not commonly used. The investment cost in Ethereum is far lower and that is where the ground between these two is levelled.
Even though both of these assets are part of the crypto world, you would be intrigued to know that they are everything but identical. That is exactly what we are going to talk about in this article as we will be making a comparison between Bitcoin and Ethereum. Considering the fact that Bitcoin is far more popular, that is what we are going to start with.

Bitcoin was invented in late 2008 and released in 2009. To this day, nobody knows the identity of its creator. All that we know is that this person or group goes by the name Satoshi Nakamoto. The first transaction with Bitcoin was made in 2010 after a man purchased pizza at Papa John’s.
Over time, Bitcoin grew in popularity and became the number 1 cryptocurrency in the world. Its peak value was reached back in November 2021 – $69,000. What’s even more impressive is the fact that experts believe that Bitcoin has the potential to reach $100,000 in the near future.

Now, let’s get to the specifics. Bitcoin is a cryptocurrency that is used for making a profit and for online transactions. There are thousands of companies from all around the world that accept it as a payment method. El Salvador recently became the first nation in the world to fully adopt Bitcoin as a legal tender.
To generate Bitcoins into the blockchain, people need to mine them. In order to do that, miners need rigs. The average Bitcoin mining time is 10-15 minutes. Basically, mining is a process through which miners record and verify Bitcoin transactions. The more Bitcoins they mine, the more Bitcoins they will receive as a reward.

During halving events, mining Bitcoins becomes difficult as the “production” is cut in half. Thanks to that fact, it is harder to generate Bitcoins into the network and hence, history tells that shortly after a halving event ends, Bitcoin’s price spikes.
So far, there’ve been 4 halving events and the most recent one was in 2020. The next halving event is scheduled for 2024. Bitcoin halving events take place when 210,000 Bitcoins have been mined. That always takes around 4 years to complete.

Each halving event so far led to a spike in Bitcoin’s price. The first halving event in 2008 led to Bitcoin’s expansion on the market. After the halving event in late 2012 ended, Bitcoin’s price spiked to over $700 in early 2014.
Then, the third halving event in 2016 led to Bitcoin’s massive spike in 2017 as it reached over $28,000 in late December. After that, the asset plummeted, and it took 2 years for it to stabilize. The 2020 halving event led to Bitcoin’s historic rise of $63,000 in March 2021 and $69,000 in November 2021.
One additional interesting fact about Bitcoin is that experts believe that in the distant future, Bitcoin’s value will continue to rise. By 2025, it is expected that it will rise to over $250,000. Then it will reach its biggest achievement in 2030 as it will peak at $1 million. Of course, the market and the currency itself are extremely volatile and it is impossible to predict its distant future, so the best thing to do now is to wait and see how things unfold.

Ethereum – More Than Just a Cryptocurrency

Ethereum is far younger than Bitcoin as it was launched in 2015. We will get straight to the main point and say that Ethereum and Bitcoin are two completely different things. While Bitcoin is a cryptocurrency, Ethereum is a blockchain-based platform that runs Dapps.
Its native currency is also expected to rise a lot in the distant future. Some experts believe that it can go beyond $6,000 by the end of 2022 and maybe even reach $8,000 by the end of the decade. Its value may be far lower than Bitcoin’s but that doesn’t mean that it won’t be extremely profitable. But enough talking about the future potential, let’s get back to the details concerning this network.
Users can build decentralized applications without any censorship and conduct safe transactions with each other. In layman’s terms, Ethereum is a whole network that actually supports Bitcoin as a cryptocurrency. Ethereum has its own native currency called Ether.

Now, you might think that there are tons of platforms where you can conduct various transactions and run certain apps. After all, Google Play Store and Apple Store are the best examples. The main difference between these stores and Ethereum is the fact that the likes of Apple Store and Google Play Store are centralized, meaning that one person or group controls the apps.
Hence, they have the power to censor content that they do not want to be featured on the app. That is not the case with Ethereum. As a completely decentralized network, everyone is free to run whatever types of apps they want.
As for smart contracts, here’s how they work. They are in charge of automatically conducting transactions or other types of actions if both parties reach an agreement. Let’s say that you are an online lending company and ask your clients to submit certain documents before they are approved/declined a loan.
If they meet the criteria, smart contracts will instantly transfer the loan to them and thus, make the process extremely efficient.

Thanks to the fact that Ethereum is extremely safe, effective and its decentralization leads to greater security, many experts are convinced that it can be Internet’s replacement in the future.
To make things even better, there are plenty of Ethereum API services that make the data communication between Ethereum and the user extremely efficient. One of the best platforms that specialize in this type of service is Chaingateway.io.

Even though Chaingateway.io is a rather new solution, it rose to popularity quite fast as its services are second to none. There are plenty of advantages that this Ethereum API provider offers:

What Are Crypto Trading Bots: Key Benefits of Using Machines